She presents a show on Classic FM, as well as having her finger in a number of other entertainment pies, including her own fashion range. So Myleene Klass was the perfect choice to host The Laurence Olivier Awards red carpet arrivals on Sunday evening at London’s Royal Opera House. 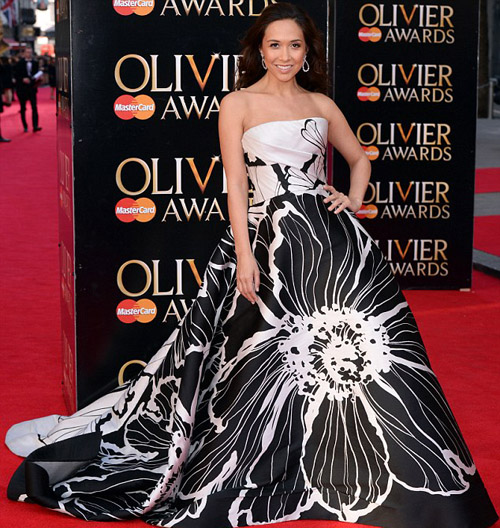 And ensuring she had the most dramatic of arrivals, the 36-year-old wore a breath-taking black and white Dennis Basso S/S14 collection gown as she sashayed down the red carpet. A stunning strapless creation, the gown features huge, over-sized flowers in a monochrome print. Also boasting a dramatic trail, which requited momentary help from staff members, her look perfectly contrasted with the red carpet, while looking demure and timeless. Meanwhile, her hair was worn in a cascade of curls while she also sported some diamond-encrusted earrings. While Myleene of course looked stunning she wasn’t the only star to bring out the glamour. 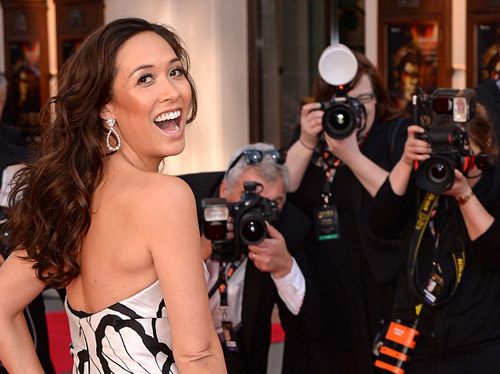 Gemma Arterton, who was co-hosting the awards with Stephen Magnan, opted for a gorgeous pale blue dress. The floor-length frock looked elegant alongside her smart bob and drop earrings. Pop star Diana Vickers, who is of course no stranger to the world of theatre herself, opted for a sexy backless black dress. The gothic and gorgeous gown also featured a key –hole section at the front, which added to the glamorous feel. The 22-year-old wore lashings of black eyeliner and sported just got out of bed hair. 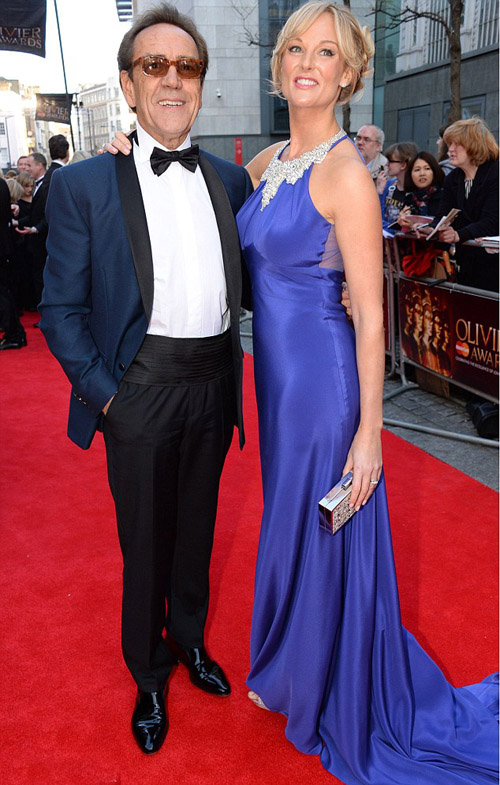 Fellow singer Alexandra Burke, who is set to appear in The Bodyguard, also opted for an eye-catching look. The one-time X Factor winner was almost unrecognizable in an intricately beaded white gown and on-trend top knot in her hair. Stage co-stars Robert Lindsay and Katherine Kingsley, who star in Dirty Rotten Scoundrels, had a ball posing on the red carpet away from the stage. Actress and musical star Samantha Barks looked her usual beautiful self, wearing a pale purple strapless dress. Her look certainly seemed to go down well with her boyfriend Richard Freshman who could barely take his hands off her. 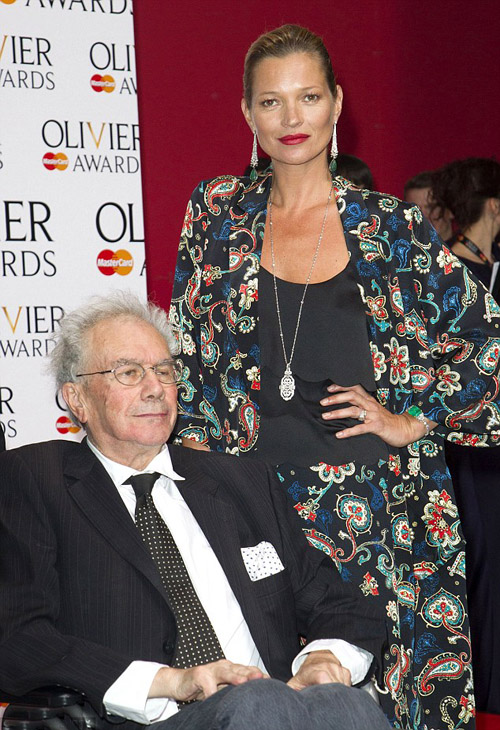 Other stand out ensembles included Ruth Wilson who wore a daring black dress with sheer sections  throughout. Natalie Gumede looked particularly glamorous wearing a low-cut black dress with interesting strap detail and her hair in a large bun. Sex  And The City star Kristin Davis, who is currently starring in Fatal Attraction on the West End, did Carrie Bradshaw proud in her peach coloured dress. Actress Olivia Grant opted for a theatrical flapper style dress which she had great fun shaking on the red carpet Meanwhile irreverent musical The Book of Mormon and hit geopolitical drama Chimerica were the big winners at the awards. 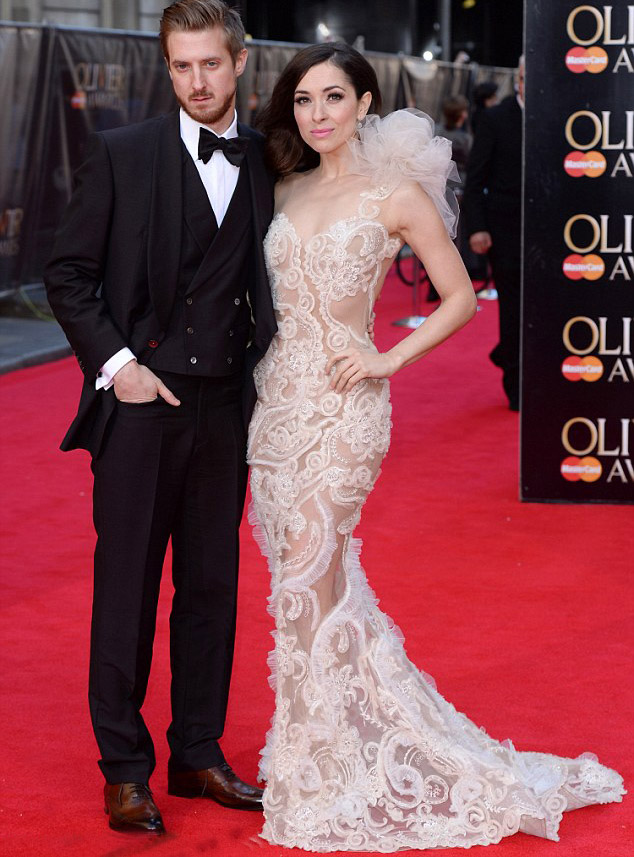 The Book of Mormon- which stormed London just as it earlier wowed New York – won four prizes, including best new musical and best actor in a musical, for Gavin Creel. The awards, Britain’s equivalent of Broadway’s Tonys, honor achievements in London theater, musicals, dance and opera. Founded in 1976, the Olivier Awards have been laying on the glitz in recent years, with glossy ceremonies modeled on the Tonys. This year’s hosts were actors Gemma Arterton and Stephen Mangan, and performers included tenor Joseph Calleja, Broadway legend Bernadette Peters and ABBA’s Benny Andersson and Bjorn Ulvaeus, who reunited onstage to celebrate the 15-year West End run of Mamma Mia. 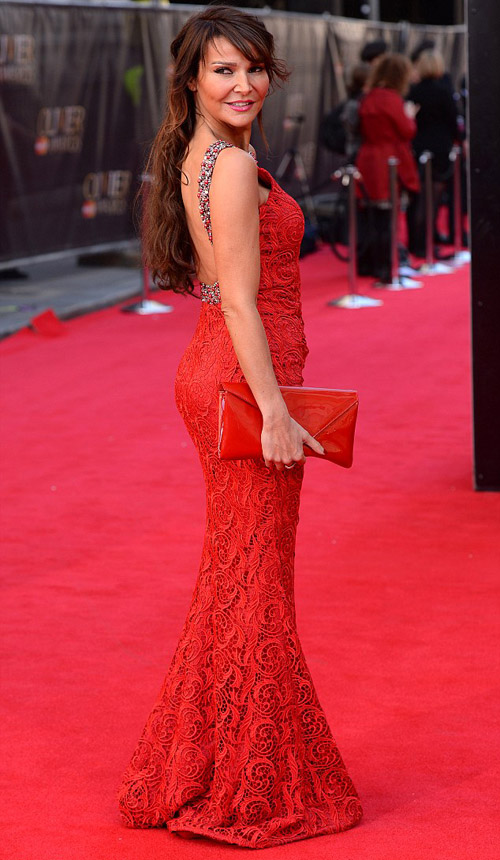 Winners in most categories were chosen by a panel of stage professionals and theatergoers. The Audience Award, decided by public vote, went to Les Miserables. Screen stars Jude Law, Tom Hiddleston and Judi Dench were among the big-name nominees who missed out on acting prizes – Dench to Manville and the men to Rory Kinnear, one of Britain’s leading stage actors, awarded for his scheming Iago in Othello at the National Theatre. -Dailymail

One Direction Announce Our Moment Fragrance

Calls Grow for Ivanka’s Jan. 6 Texts to Be Released after Lindsey Graham Reveals She Was Trump’s Conduit

Kirstie Alley Net Worth: Find out How Much Money Actress Made

Republicans stay silent on Trump’s call to terminate the Constitution